X-ray image from sensor
When a X-ray hardware device and it's plugin is installed, a continuous group of tools will be added to the toolbar. A new menu item will also be added to the Tools menu.
The group

activates the sensor and the dot turns green.
A click on

deactivates the sensor and the dot turns red.
A click on

shows the sensor settings. Hardware devices for X-ray capture will all have unique options and require different routines for best results. Please refer to your hardware manual and your reseller for more info.
This is an example of a plugin setup window, the settings that could be changed by a user are explained here the other should not be touched without knowledge about the effects: 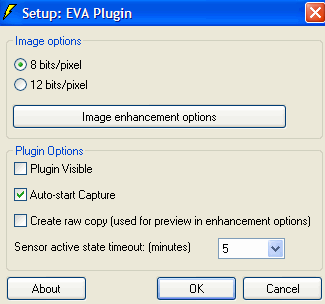 Image options - Refers to the way the images will be stored, 8 bits/pixel makes the resulting file much smaller but does not have the same grayscale depth as a 12 bit image. It is important to mention that the image enhancements that are done on the image when captures is always done in the highest available bitdepth. The result is then saved in either a 8 or 12 bits/pixel.
Plugin visible - Shows a plugin window on the screen while it is activated.
Auto-start capture - When DentalEye is launched the sensor is automatically activated. Rem: under Preferences - Capture you may setup the plugin to activate automatically as soon as a new patient is selected.
X-ray image from an Image plate scanner (PSP scanner) with the Developer
The Developer is used in a network where one image source is connected to a computer that is shared by several users. Such as a centrally placed X-ray scanner that is accessed from several treatment rooms.
The purpose of the Developer is to make capturing images with a shared X-ray equipment as easy as possible.
Set up the system in System - Preferences - Network
The computer with the shared equipment is set up as a Developer server with a certain ID number. The computers in the different treatment rooms are set up as Clients to a Developer with the same ID number as the Developer server.
It is possible to have more than one Developer server set on the same ID number. This way several image sources can be shared in the same practice. In larger systems with several workgroups having their own shared equipment, it will be practical with different ID numbers for each workgroup.
Color Image from Video device
When the required hardware is installed, a continous group of tools will be added to the toolbar under the menu bar.
The group belongs to the video source. A click on activates the video and the red dot turns green. Rem. you may set up the video plugin to launch automatically. A click on shows the video plugin settings. This is usually done at installation and is not explained here. Go to a presentation of the installation procedure of the Video plugin.
Color Image from a Digital camera (Autoimport plugin)
There is a plugin available the makes it possible to automatically import images from any drive that can be reached from the computer, it may be a harddrive on a computer with a digital Panoramic device or a digital camera or image card reader. The purpose is to simplify the often cumbersome handling of images in digital form. the Autoimport plugin can be setup to import and clear the images from the source without a single keystroke.
The group

activates the plugin to import the images. The button

is available if the plugin needs to be manually deactivated. A setup window is reached from 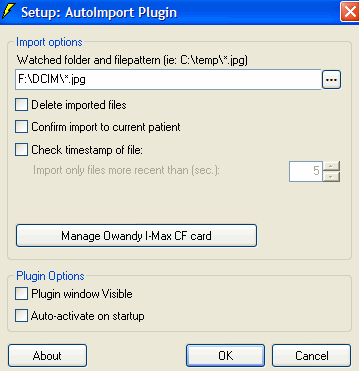 Watched folder - is the full path to where the images will be situated.
Delete imported files - This option actually clears the source of the images that has been imported and thereby makes the memory card in the digital camera fully available for the next patient.
Confirm import to current patient - Gives you a second chance to check that the right patient is selected before the images are imported.
Check timestamp of file (together with the window for seconds) - Makes it possible to setup so that only the most recent images are imported. The images in the source will not be deleted.
Plugin visible - Shows a plugin window on the screen while it is activated.
Auto-start capture - When DentalEye is launched the sensor is automatically activated. Rem: under Preferences - Capture you may setup the plugin to activate automatically as soon as a new patient is selected.
Go to a presentation of the Autoimport plugin.